Fluffing around and finishes!

Weekend!!! DH at work, two of the boys had had a tummy bug so we cancelled Saturday morning swimming classes and instead of leaving the house early in a mad rush we took it just easy :-) DH had cleaned our house on Friday, so the only thing that really needs doing is the washing, and thanks to our very autumny windy day yesterday I have all baskets full to fold and put away.
Originally I had gotten up all excited on Saturday morning because on Friday my order for batting and a few other bobs was dispatched by Stitchworks (you girls were awesome, straight away picking up on the mistake I had mad in my order!!!) but sadly it didn't arrive on Saturday morning (well, we are on rural delivery after all...). I expect it will be here on Monday now, well definitely in time for next weekend.
I kept on fluffing around, but finally, in the late afternoon, I pulled out my 16 1/2" sample of tessellation. I decided that this would be a good practice piece for some more feathers. I divided the piece in half diagonally so I would get a similar shape to what I have on my QD9s; one half I stippled very small as I had left very little space to the centre line, the other half I went slightly larger:


I had some difficulty with stippling so small, I had to stitch fairly fast to get the stitches small enough that the shapes didn't look too jagged, but when I turned it over, all sorts of tension issues became apparent: 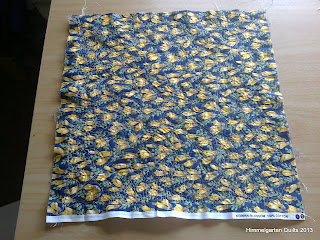 16" is just the right size for the cushions on the sofa, though it is not quite the colours I had imagined for the lounge: 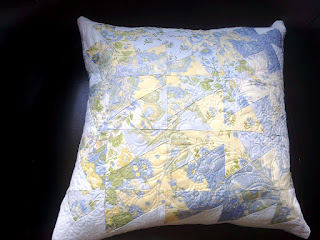 I can't remember if this was one of my 10 UFOs from the start of the year, but it's done now anyway!

For a few weeks I had been working on the binding and thread ends of the Dinosaur Quilt, and last night I finally finished it: 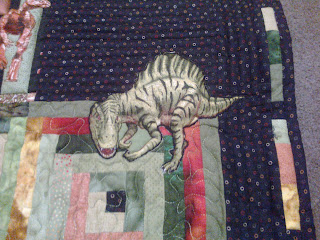 That one was definitely on the UFO list :-) Glad it's finished, I enjoyed it, and I have learnt heaps. If you want to read more about this, just click on the Dinosaur Quilt label.