The school holiday are almost over and the Quadruple Disappearing Nine Patch Quilt is finished! Kids are watching 'What Now' - a Kiwi kids' institution for Sunday mornings, so I actually get a turn on the laptop (my work laptop is still at laptop hospital...)

Towards the end of last year, Suz and I visited Carolyn, The Powerquilter. Amongst other things I bought a Batik Charm Pack. I really wanted to do something with these, so I tried out the Double Disappearing Nine Patch as seen on A Few Scraps. Initially I toyed with the idea of using black to go with the Batiks, but I stayed with white on white instead. For batting I chose cotton/bamboo from Stitchworks which I found wonderful to work with.

My very clever oldest DS (11y) asked if I could continue the pattern to make it a Triple or Quadruple Disappearing Nine Patch - and it worked! Lovely Rona from Layer Upon Layer did the maths for me in her comment, click here if you would like to find out what size starting squares makes what size triple or quadruple D9.


At 21 1/4" each the 16 blocks were simply too big for a single bed (originally I had planned this to be Storm's quilt), so they had to go onto my NZ Superking Size bed and I discovered in the process that this is 71" x 80", smaller than the King Size 76" x 80" from The Quilter's Pocket Reference Guide (what would we do without Wikipedia?). 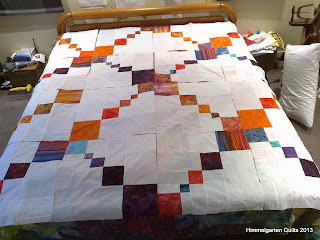 I played with different settings 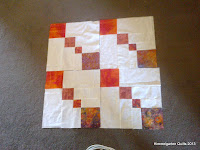 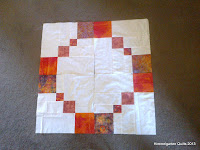 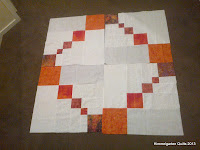 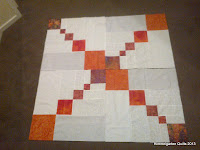 and ended with this 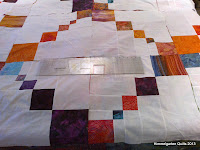 This was in February when Diane Gaudinsky was the guest tutor on The SewCallGal. Her fantastic tutorial inspired me to quilt fmq feathers in the white spaces: 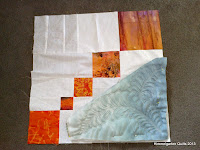 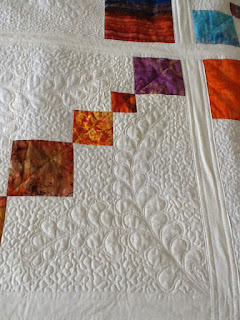 I have been following Leah Day's Freemotion Quilt Along and in the process learnt a lot about stippling - I have even practised!!! This has really helped me with stippling behind the feathers to make them come out better. For the batik squares I simply stitched in the ditch and added the diagonal. For the white areas I used Gueterman Cotton thread, but I was disappointed how many times the thread broke - my machine seems to like Aurifill Cotton better! 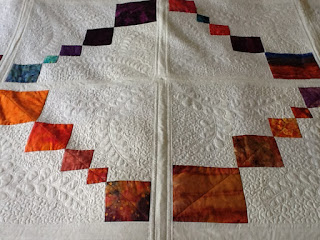 Early on I had decided that this was the quilt to learn to do QAYG - I really liked Mari's method on The Quilting Edge. I used joining strips of white on white backing from Stitchworks (very reasonably priced and still good quality, unlike some of the other backing fabrics I have come across!), and for the back or the blocks a large square of batik each. I was held up slightly when I ran out of white on white - I had forgotten to count the front joining strips twice as Mari recommends to use a strip folded in half.

As borders I added another sashing strip all around plus more batik squares (looking through my stash I can see I have to make another batik quilt, I just love them and there are plenty!). I had cut the white on the back 3/4" larger than the front so I could fold it over the front and machine stitch it down as binding. 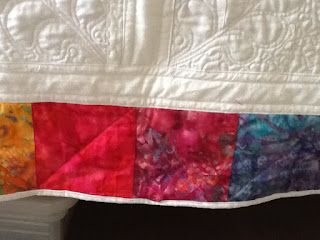 And now it's finished! At 98 1/2" square, the cotton/bamboo lets it drape beautifully across my bed! Now the rest of the bedroom needs to match it (maybe I should give it an 'autumn clean' lol). 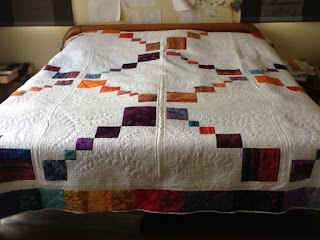 I told DH that I had gotten some of the quilting out of my system now with two pieces finished within a week, only to sit down yesterday and work on my SiL's placemats lol so that resolution lasted all of 12h obviously - must be an obsession after all...

Other things I have been thinking about:

Do I really have to go back to work tomorrow?!

Linking this up to Sew It's Finished and to The Freemotion Quilt Along :-)