Nothing better than summer holidays I reckon, heaps of time to clean the house (...), do the washing (!!!!), yell at the kids (sometimes) and catch up with friends!
Bloghopping has been taking up some time, too, yesterday I saw a pyramid door stop on
http://patchworknplay.blogspot.com/2011/12/christmas-gift-making.html and spontaneously decided to make my own. This is the final outcome though still awaiting filling; DH suggested to use some gravel he had bought but suggested I wash that first because it is so dusty. 23h later, the stuff is still not dry, has been returned to the oven in an oventray as the sun obviously didn't do the trick today... 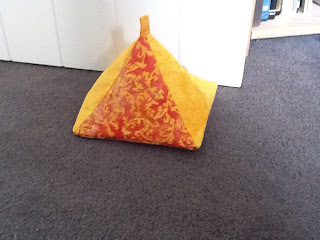 I once again realised that my stash is much bigger than it should be I think, and part if this is a pack of batik charm squares I would love to do sth. with. After consulting my expert quilting friend Suz I decided I will chop at least some of them, and being a real copy-cat I tried out the double disappearing nine patch as seen on http://afewscraps.blogspot.com/2011/08/double-disappearing-nine-patch.html and on http://suz-allthegoodonesaretaken.blogspot.com/search/label/Double%20Disappearing%20Nine%20Patch. Looks quite neat despite the cheap and cheerful white fabric - I had the intention of trying it out with a black with white flowers Moda fabric, not sure yet, I like it with white. Definite bonus there are hardly any seams to match, and starting with 5" squares you end up with 10" blocks - nice size to make it into a bedquilt??? 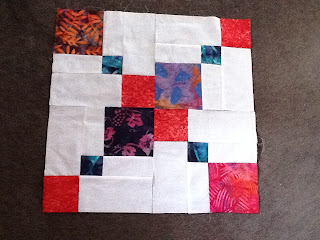