4 weeks in and we have found most items we have been looking for, either found a home for it inside the house or put it back into a box to keep it in the garage until we have more space. It is actually amazing how much does fit inside this relatively small house :)
2 weeks ago I found and brought up my bobbins and thread (not without dropping two open boxes with pin into the grass at the gate...). Last weekend I did the dreaded mending (and that was only the new mending, Suz, the old one did make it here, too :0) and gave my first echo swirls a go (yes, still working on that Tokyo Subway Map quilt...). Working on the dining table is simply too inconvenient, having to put the machine away after every session, so this weekend I persuaded DH to cut the table top in my small sewing table to size and tada - I have a sewing table again! (It didn't go perfectly, I had drawn to exact size and only told him once to make it larger than that lol; however, we got there eventually :D). 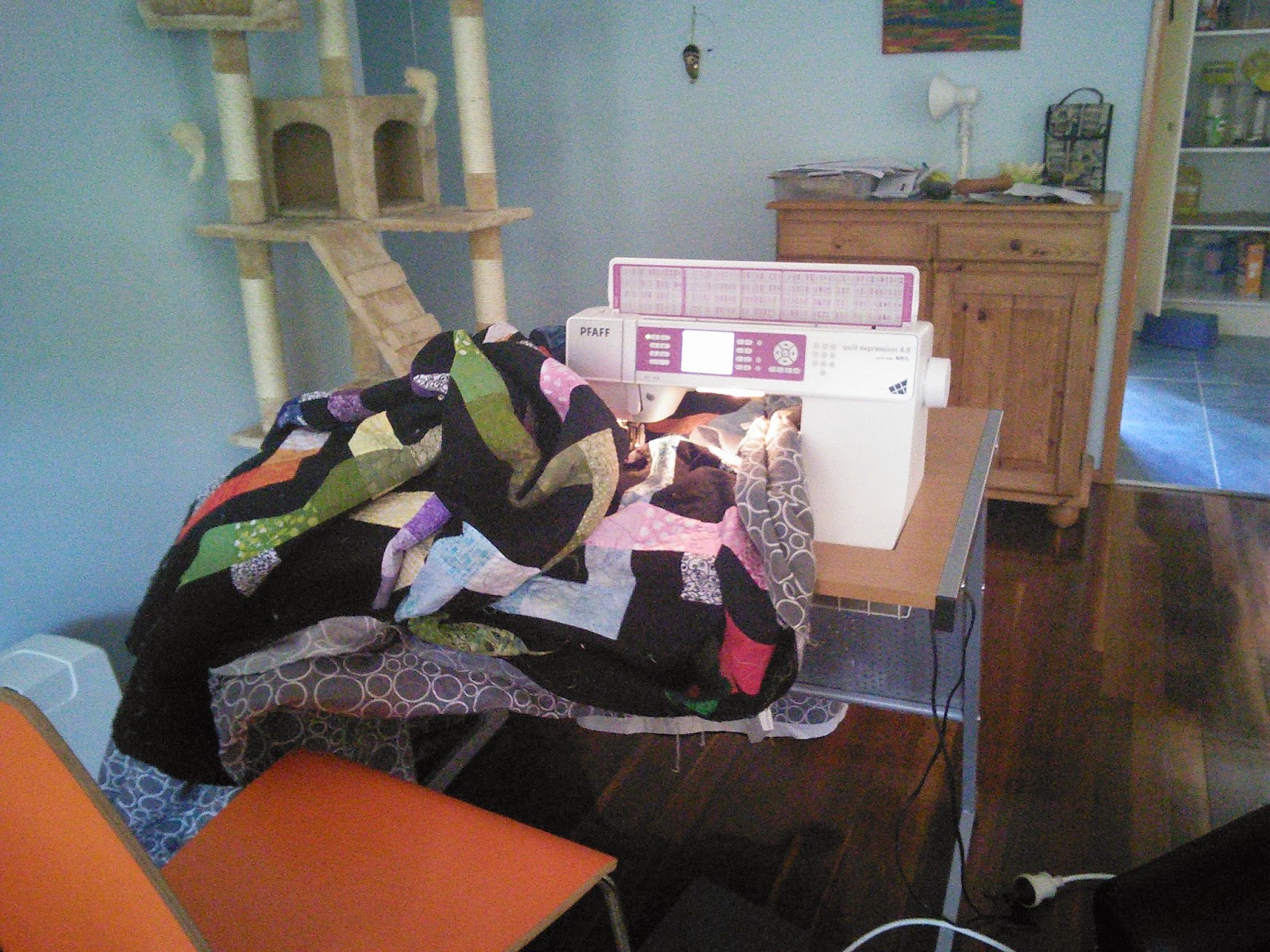 The problem remains where to put it; unless I want to take over one of the boys' bedrooms after all, it will ave to stay in the lounge for the time being. Today I moved it right under the fan in the lounge which made for a comfortable temperature, but light is not that great, especially when fmqing black on black; I'll need to experiment a bit. To be perfectly honest I'm over that quilt, and itching to get my fingers on something new! Been thinking about smuggling my stash into the house so I can get something new started, I'm thinking colourful, not batiks, piecing involving curves... I also have my Whakapapa quiltlet sitting somewhere waiting for more work to be done to it... 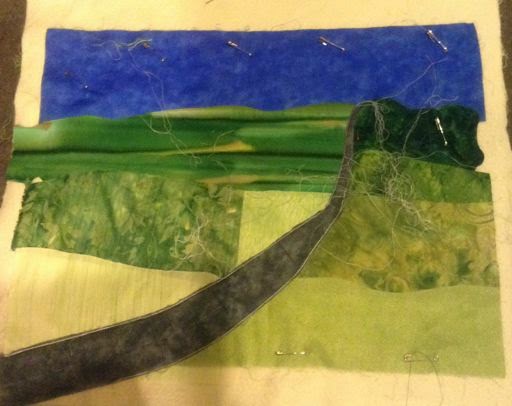 And then there was this one waiting to be sandwiched and quilted - in the back of my head is still some Jenni Madsen (Green Fairy Quilts) type dense quilting, but do I have the patience for this? Maybe if I did some serious marking and worked through sections of it? Or do you think I should maybe just do some all over design? 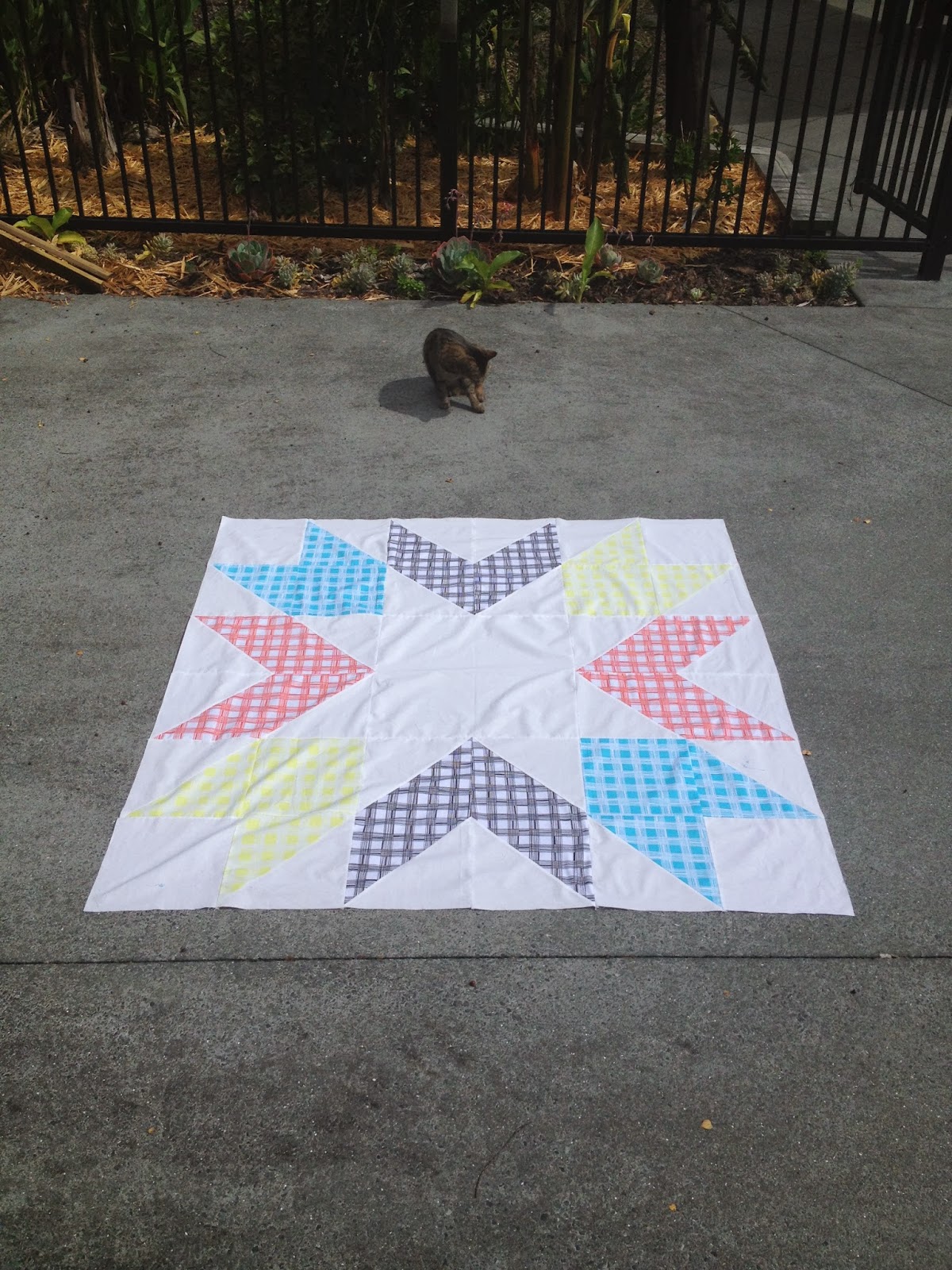 We are settling into our routines, the close proximity of everything is still a novelty after almost 18y living in the country side. Thinking about it, its not so different from how we had grown up in Germany. While I still have way to go, due to more walking I am less unfit than I used to be, and I have made a small start at loosing weight.

The temperatures have been very high (day and night) from when we arrived until about the end of January; for the last couple of week temperatures went back to more comfortable low 20s at night and around 30 during the day. We have had a few heavy rains, one where I simply took my shoes off and walked barefoot to the door; if we owned this place, we'd definitely look at rain water tanks :)

The boys have started school and after 2 weeks all three are happy. Mstr10 gives me a 10 out of 10 for every day, he has a lovely young teacher who is obviously great at building relationships with her students. Mstr14 loves some of his subjects, namely STEM (Science, Technology, Engineering and Mathematics) which will involve use of the school's 3D printer for their own designed projects, and Multimedia Studies. We were not able to get him into all his choices, we are still pushing to have him take Maths and Computing in the next year level up as he passed this level last year and with Merit. Mstr12 was initially very anxious about school, but since he has made two friends he has been happy going to and coming home from school, too :)

Work is going quite well, I have spent time in 3 schools, still lots to learn on the software side as I didn't use Office365 in my last role. Part of my time I work from home, part from the office in Paddington which is just 30min on foot and on the bus, or just under 20min by car (depending on traffic). DH has a job application in progress, we are hoping he will get the job, otherwise he will look for something else.

There are a few things I still need to get used to; having lived in the country for so long I am used to buying in bulk, preserving and freezing. We bought a new large fridge with a freezer compartment when we moved in, but this freezer space is much smaller than I am used to. So I alternate between buying loads and stuffing everything in the freezer one week and going to the supermarket for small lots every other day the next... I'll figure out a proper routine eventually!

There are lots of similarities between New Zealand and Australia, many products in the shops are the same, in fact many shops are the same (meaning many Australian chains have branches in New Zealand). Love shopping at Ikea (I probably mentioned that before lol), and a couple of weeks ago I found out that H&M is due to open a shop in at the shopping centre in Indooroopilly! While I don't have the figure from 20y ago anymore, I'm still looking forward to going shopping there again!

Some things have surprised me:

I have now completed 3 applications for a tax number (=IRD number), the first one was lost in the system, the second one could not be found at my second call to them, at my third call the second and third application have been found (not the first still) but as it's been less than 28 days from the second one, it can't be followed up yet?!

We had heard in NZ that Kiwis don't qualify for special education support; however, the guidance counsellor went out of her way and tracked down a way to get some support for Mstr14 should he ever need it.

Mstr14 was referred to the children's hospital for continuation of his diabetes care late September. We heard nothing until I contacted them early January. Eventually they reviewed his referral (admittedly, two hospitals had been merged and I suppose things can be overlooked) and while he was classed category 2 (to be seen in less than 60 days), we were told the wait time for his first appointment is 6-9 months! And we send NZ patients to AUS because of our waiting times?!
With the help of an awesome FB Diabetes Community we have found a GP and a Diabetes Educator (Diabetes Nurse) who will look after us for now.

Some groceries are cheap, some are expensive: Milk is $1/l, alcohol is only sold a liquor stores and rather dear, however, you can get German beers relatively cheap :) Beef is expensive I find, but then we have been lucky to have had home kill for many years. Petrol is cheap, gone back up to $119.9 after it was just over $1 for a while. Internet packages are cheap. Citrus trees in the garden centre are expensive. So everything evens out in the end.

We haven't done too much sightseeing yet, we though we might head a bit inland one of these days. The kids and I enjoy being home on the weekend, but DH is keen to get out - he might have to pick up a hobby or a job soon!

So that's all from us for the moment, I hope you all are well wherever you are and get some sewing done!
Happy Sewing!
Posted by Monika at 23:33