One wouldn't often think that these two go together lol. The party was a quiet affair, the children more or less enterained themselves, pool & nice weather = successful birthday party! This is the cake I made that morning, in the spirit of 'my favourite computer game character':

I just realised we have no photograph of middle DS dressed up for his party as Cactus McCoy (once I had found out what the game was about, it has been 'off the menu'...) but here he is getting painted:
This morning I then decided I had to get back to fabrics. Recently I had accidentally felted my good old childhood woolen duvet inner in the washing machine (well, it must have lasted more than 20 years until that point!), and I remembered that I had a too small duvet cover from DMiL and it fitted pretty much. First I thought I might get the kids to decorate it, but then I just kept going and had (almost) all the fun for myself: 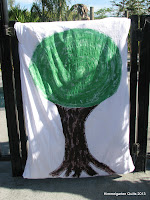 Youngest DS has since added grass and flowers to it, now I just have to adjust size slightly and we're all good! I think I might get into some fabric painting and screen printing over the summer holidays, will have to look out for cheap T-Shirts or cheap bedcovers. Good practice for when I teach screen printing to my students after the holidays!
After enough guilty procrastinating (DH was working hard-out in the garden on a fantastic summer day) I first spent some time cutting strips for 3 more LCBs, following Marti Mitchell's instructions (I have her book, but not her rulers, but it was easy enough). The longest time was spent on selecting the order of the strips, taking colours and length of leftovers into account. Later today the actual sewing took very little time, here are the first four, not in the final arrangement, but to get an idea: 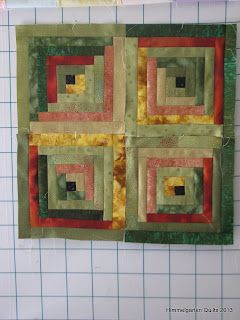