There should be a law against blog hopping, don't you agree? It leads you astray very easily... All these lovely projects of other people to look at!
I have been quite intrigued by the 12x12 quilters and their work, and recently Ms. Lottie had mentioned on her blog she had made a journal quilt titled "One" so here we go, the resolution to my 'what to do' dilemma!
I have no idea why she called it 'One', but inspired by the 12x12 quilters this became the theme of my quilt. So what is 'one'?
To my mind came images of mosaics where lots of often irregular pieces form a one (much like some of my crazy quilting placemats, or the diary cover and matching pencil case). Mosaic is also one of the similes I have used in my work when I try to explain to teenagers that everything they do in their lifes will add to the mosaic that is their life, and blank spaces might be filled up by different experiences or choices later on.
I also thought about contrast, how white = light and black = absence of light. Good or bad wouldn't exist without the other. The Yingyang symbol would have to be part of my creation, but not in a negative but in a complimentary way, much like Paul McCartney's "Ebony and Ivory": Living together in perfect harmony, side by side on my piano, so why can't we...
I didn't take working progress photographs, but essentially I made a background from brightly coloured squares and rectangles (oranges, yellows and pinks). While I had aspired to make it 12" square, I got sick of it at about 8" :-) On top of that I invisibly appliqued a Yingyang symbol from ivory and blackish Moda fabric scraps. However, something was missing, so I found some dark blue batik and appliqued the square onto it with satin stitch and on point. Much happier now! Masking tape provided me with the distances for some parallel lines in the blue corners, and inspired by some recent free motion quilting practice I used variegated thread to quilt the 'hairband' pattern on the coloured pieced part. Voila!
Now a quick handwash to get rid of marks the iron left on the light fabric and - disaster! The blue batik bled all over the work... Yes I know you are supposed to wash all fabrics when you buy them, I have done so with some but not all, and so far, in about 6 years, I have never had a problem until today!
Following good advice I ended up removing the Yingyang and instead of invisible applique I tried out my latest purchase - Mystifuse - and with raw edge applique added a new Yingyang - phewww! The lines still needed something else in them, so I decided to free motion 'write' in the space. At home we speak German (though the boys' is rather a Genglish...), so following my theme of the 'different parts making a one' I wrote eins and one in two opposite corners, and zusammen and together in the other two: 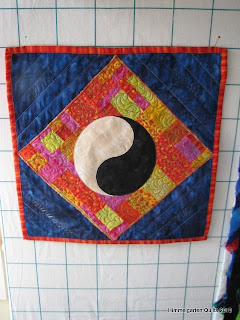 Overall, I am quite happy with the end product, less glamorous than some of the works that have inspired me, but a decent start. Number 'One' after all :-) Suz asked the very good question what I would do with it - what does one do with these?? I am not sure, any suggestion much appreciated. Nadia suggested to have a few hanging above each other as a wall hanging - a good idea if they go together.
So why make journal quilts? To set yourself a challenge. To make sth. small and achievable. To try out a new technique (or a few). I wanted to see if I cut turn sth. abstract into a quilt. Have you got any other suggestions?

Just a quick picture of the blanket stitched reverse applique: 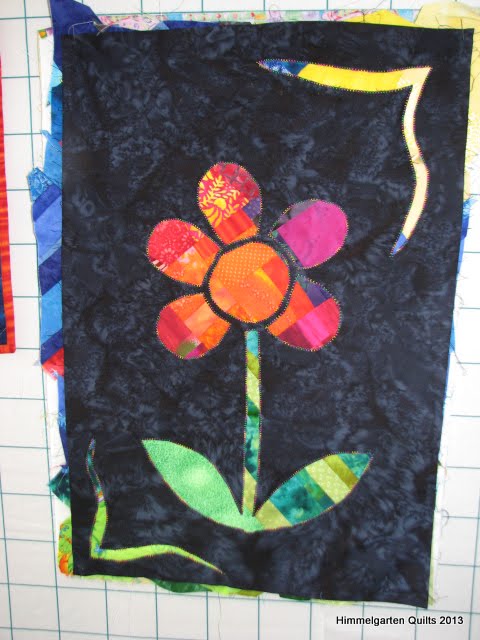 I will find a frame for it eventually!

As for UFOs, I have decided I will finish the pastel tessellation and the fabric weaving quilts, I would struggle to pick the former up again if I put it away (and I still like it), and the latter has just been taken out of hiding, so it might as well stay out to.

That's me for the moment, and if anyone can tell me how to post two photographs side by side I will use up way less space.
Posted by Monika at 20:24