I had heaps of fun during the July break creating all sorts of things - in fact I somehow really got onto a roll, will be hard to wean myself of that now that the real life intrudes again! While I put some short posts up on the iPad via the iPod Blogger app, I only now got to load the pics from my phone to the laptop and finally can do a long overdue catch up.

Firstly, I received the remaining two fqs from Leslie's Handprinted Fabric Swap, and aren't they gorgeous?

And this is what I turned Emily's fq into yesterday: 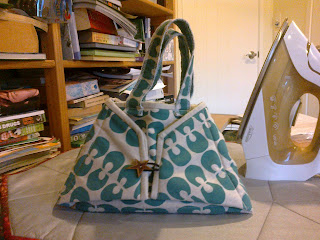 The pattern is for the Caddy Pad by Sister's Common Thread which when I made it recently just looked like a cool little handbag. With a few adjustments - it is :-) Inner fabric is a green batik which I had to piece (I also reduced the overall measurements by 2" all around to make it fit). The folded flaps are now stitched so it won't fold out into the pad, instead I have one main pocket in the middle and four smaller pockets, two in front, two at the back, just right for keys, phone, brush etc. Suz and I had been on a girls day out ("Mums only, no children"), at The Country Yard I had seen a neat pattern for a wallet which I didn't buy in the end only to find a bright pink leather wallet at Farmers on sale later that day. So with a new wallet I needed a new handbag (girl logic, I'm sure you'll agree!).

What else have I been up to? I have shown you pics of my placemats, inspired by and for my mum - have a look at her blog, at the moment she is working at some new felted flowers over in Germany. I'll post new pics when I have completed the binding.

I also completed the third and final portrait of our three DSs:
Same method as before but this time I used the silk chiffon I had painted. As stabilizer and backing I used the cotton drop sheet. Again I raw-edge appliqued it, as it is fused with mystifuse it kept the softness, and the cotton-bamboo batting helps, too. In the background I quilted some cloud-like shapes as this DS is my soft, snuggly daydreamer :-) In difference to the other two portraits I won't put it in a frame, I bound it and attached a hanging sleeve and hopefully will soon be able to hang them all up (need to get some better hooks). One of these days I will write a tutorial (I slightly adapted it from the one in Quilting Arts), this is a fun technique and could be used for all sorts of motifs.

What else has been happening?
I have resigned from my current job and accepted a new position in the Special Education department of the Ministry of Education. I am yet to hear from my current school when they will release me, but I hope to start the new job about mid August.
We had very cold nights and gorgeous days for the last week or so, but today it was just raining more or less non-stop.
I have been contemplating the meaning of 'mid life crisis' after I discovered my first ever grey hair!!! Shock, horror! Well, I'll be 40 later this year so it's about time I suppose. BTW, I don't feel I'm in middle life crisis, but I decided that what comes with 'mid life' is maybe more of a conviction 'this is what I want to do, and not that'. Actually I was thinking about this all while I was mowing the lawns (1+ acres) on the ride-on mower, the humming sounded almost meditative (don't tell my hubby, he'll either declare me completely insane or he'll have me do the lawns all the time!). So I'm just thinking changes, decisions, choices people make which are often attributed to a 'mid life crisis' might in fact be more a 'I know what I want'. We'll see what further enlightenment future lawn mowing sessions provide...

I better finish this post before dinner gets cold without me...