Some projects just take FOREVER, and my Metro Rings quilt is one of those projects... I first mentioned it in a post on 12 May 2015 while we were living in Brisbane, I have posted about it a few times and it's been languishing next to my Sweet Sixteen for months now (it's be a favourite sleeping place for our cats, some of the stains on it are from kitty cats that are no longer with us...). Yesterday I picked it up again and added some more quilting. 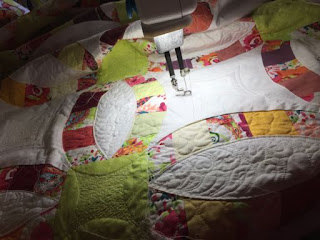 After some more work on it this afternoon I decided to assess where I am at for now (that left me rather frustrated...).

To put it on record (after all, it doesn't count if you don't blog about it, aye?), this is what quilting is still left to do:


Rather a lot left to do still but I am hopeful I will still like it - let's see if I can get this done before the 4y anniversary :)

I learnt so much through the mistakes I made in this quilt, incl. piecing of circles, using rulers for quilting, suitable motifs to distract from mistakes, using S16 to quilt etc. etc. that I decided to call the quilt "Learning through Mistakes". Let's hope I won't have to learn too much about removing the stains from this top...