It's been a while since the last post, but I've still been busy sewing.
The cubes have been multiplying...

in fact I currently have the last 6 cubes in progress. DH made the suggestion that I keep an irregular gap running through them (see above) - I like it, what do you think? Might have to work on where exactly that gap runs through to keep the 3D look intact. While oldest DS still hasn't quite accepted my offer to make this quilt for him, I'm still working towards that which will have an influence on the border fabric; as a T1 diabetic white is impractical as finger pricking to test their blood easily leaves stains on the bedding, so I am aiming for some charcoal or similar. Unlike the original patter for Opal Essence I won't be adding partial blocks to the outside, I think I might just have them 'float' on top of the border (if you have any suggestion how to achieve this without a million y-seams, please let me know!).

The Metro Rings are all pieced into 'sort of' triangles, and I have pieced two of them into one block so far: 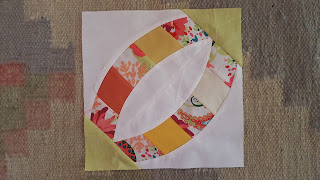 Originally I was worried I might not have pieced accurately enough, but the pattern is very generous so you have to cut the triangles down a fair bit to the correct size. I have decided I won't obsess too much about how far the green triangles reach over the curves as long as both curves are sort of symmetrical. Originally I had this grand plan to arrange the circle segments in colour ways to create 'cold' and 'warm' circles, but after I arranged them all on the bed (the only decent sized space in this house), I gave up on that, it will just be random. (I am sure I took a photo but that must be on a different device).

I could have been a lot further with this if I wouldn't have had the grand idea to make a quilt for MiL's 80th birthday in December. FiL turned 80 last year and DH flew over for that occasion, but I don't think that will be possible this year. After some browsing through various patterns, I decided on "Puddle Jumping" from thimble blossoms by Camille Roskelley - 'approved' by DH:
DH had requested 'pastel' colours (actually his original request was to make another Pastellation quilt which I declined due to time pressure and my 'been there, done that' attitude lol), and given I still had quite a few marbeled pastel jelly roll strips in my stash led me to resize the blocks and end up with this:
With white sashing and white + [something else - not sure yet what] borders this satisfies my need for some negative space to quilt in and yet should still be traditional enough to appeal to the intended recipient. My problem is that at this stage I still don't have exact measurements of the bed (they purchased a new bedrooms suite a few years ago) so I am hoping the husband will get to spy that out of other family members soon. In Germany, people tend to use single duvets despite sharing a bed, so this quilt is intended to be used as a day cover only.

Suz and I have been talking for months about getting started on our Vintage Quilt Revival sampler. Apart from life getting in the way every now and then, we had to settle on a feature fabric that both of us could get at a reasonable price. We ended up choosing a Spotlight fabric, but had real difficulty matching it with a background. We have narrowed it down to one of two Moda Solids (Porcelain or Bleached White) and this morning I was in my happy place, cutting and piecing, hoping I picked out the same background as Suz :) As we are making this as a swap, I'll just leave with you with a little tease... 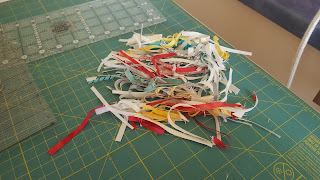 So what else is going on?

Work has its ups and downs. I have spent a lot of time away, especially during the last term break, so have really enjoyed working more around Brisbane for the last few weeks. After too many weeks of not enough to do, I now had to schedule a webinar for the upcoming public holiday as I simply couldn't fit it in any other way.

DH has completed his training and has started work.
Oldest DS has turned 15 and built himself a computer to his own specifications, partly financed by 'brother sitting' money.
The other two boys are enjoying spending time with each other incl. regular sleepovers in each others' rooms, I keep on thinking about moving them into one room, but I don't think that would work out in the long run. In difference to their older brother, they don't mind going out with us:

There's lots to like about living in Brisbane but it's not home - at least not just yet. Can't wait to catch up with family and friends one of these days :)