Are slowly multiplying after I decided to hand appliqué the circles. The most recent six (with solid dark diamond) were done on the plane and I'm not 100% happy with the curve of the circles but I'm not redoing them! This is what the project looks like to date - 18 blocks down, about another 24 to go: 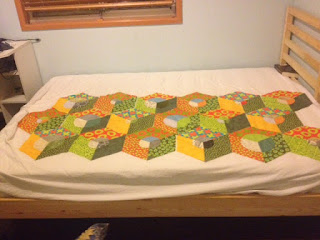 Please excuse the quality, it's hard to photograph when you are short and the room is really small! Here they are laid out on Mstr(almost)15's double bed, I think 42 blocks would make a nice double size quilt. As you can see I have included some solids into the Malka Dubrowsky collection as several of you had suggested. I tried to find a selection of neutral fabrics for the circles but it remains very busy, so I'm thinking I'll put a similar weight cream around it as a border once all the blocks are joined rather than following the pattern with half blocks etc.

The rest of my sewing has been sorely neglected, work has been very busy with a week in Darwin, a trip to Sydney and 5 more nights away over the next fortnight. I even skipped the last sew-in as I had just gotten home but I plan to go to the next one.
Suz and I have settled on our feature fabric and will sort out details of our trans-Tasman block swap soon.