I just decided that I have two wishes for Christmas:
Firstly I want my own decent camera with zoom and flash - the phone just doesn't do it at night. DH has been eying up a new fancier flasher camera and I would be happy to take his old one which takes nice pics and has about a million more functions than I would ever need - as long as I can have it to myself!
Secondly I want someone in blogland to teach me how I can easily (!) add a signature to my photos. Wendy from Sugarlane Quilts for example always has her little Sugarlane Quilts c 2012 on her pics, I've tried it on Paintshop Pro but I don't really know what I am doing and it takes FOR EVER!!!
Of course there's heaps of other things I might wish for - health and happiness, freedom of financial stress, peace for the world - and access to a laptop whenever I want to (I know the alternative is more tough love and less computer for kiddies or hubby but I am a push over after all) - or a decent blooger app on the iPad!
So I'm quite easy to please this year, am I not? lol

My, it's been a busy old time! The children are getting towards the end of their energy, lots or arguing, whining, pushing and shoving (boys after all...). Oldest DS finished school on Thursday and I can brag that he was top of his year level! BTW, his insulin pump seems adjusted to a point now where he is no longer very high at night, so I've only had to get up at 2am for the last few nights. The two younger boys will finish school on Thursday, which is also the youngest boy's 8th birthday! I think I have the present thing under control though he is expecting to get a massive Lego Ninjago set which I somehow can't see fitting into our budget or the perpetual mess in his room.

For two weeks I have worked full time, 3 days at Ministry of Education and 2 days at my old school. I find it hard to swap hats, makes me feel like a sort of split personality - neither here nor there! I have been looking for full-time work for next year, MoE still not offering more hours so now I am contemplating an offer of one term full-time at a local primary school. There's just the question of what happens after that term?! I am on annual leave from MoE after this week, still at the old school Thursday and Friday though. It will be a relatively short break, I'm back in the office on 7 January - that's a first for me, I'm used to summer holidays where I would also start preparing early / mid January but mostly from home while looking after the boys. We'll see how it goes.

The garden has been making progress, the weather is not really summery still, still plenty of TOO MUCH rain. We have been able to swim some days, 27 degC in our pool late this afternoon, I hope this will become the norm now.

I have even managed to get a whole lot of sewing done: DH has put my Pfaff machine into my sewing table and it has been bliss for FMQ! My mum Ilse is a Fibre Artist as you might remember, and last month at a workshop she was introduced to FMQ on felt. She is still practising but already making great progress. She has been creating wall hangings and I had a play with fmq on the hand felted background for one of them, inspired by the Angela Walter's Craftsy Class on Negative Space (which I yet have to finish!):

Here I am using a 12wt Wonderfil Frutti thread which I bought at the festival of Quilts - I won't be using that again, like Suz I found two ends tied together with a knot in it! It managed to bend and snap my topstitch needle in two places, and I had quite a few problems with shredding etc. (also on the There's a Square in There quilt where I used it first). Of course (!) there isn't enough thread left, so today I bought a Madeira cotton in a similar colourway from the local sewing shop. Again using a topstitch needle (the felt is a bit coarser than what mum usually makes), this 40 or 50wt (doesn't say) cotton looks similar in weight though slightly different in colour:
I had started from the side so I could have different fillers in different vertical sections of it, now this new thread is pretty much in the middle, so I have gone over to the other side and work back towards the middle with the rest of my original thread so it is more balanced. In the end little of it might be visible as mum will attach felted flowers to it, a bit like this one, but she can leave space so that the stitching is visible if she likes :-). It's been lots of fun though this particular wool tickles me (mum says it's recommended for use in rugs) - and the fluff! Next time - if she likes it enough that there is a next time! - I'll add some fabric to the back as lining so not all of it ends up inside the machine ;-)

Today I started on some Christmas prezzies, here is a glimpse: 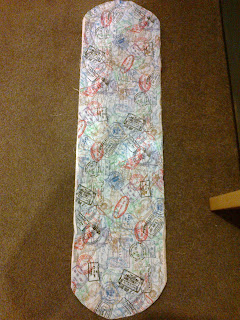 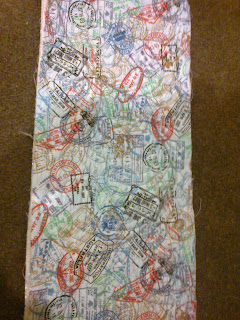 I leave you to guess what it is (now you know why I want that camera!) - the closeup should show you the Victorian feathers that are puffing out nicely due to three layers of batting! 3 similar ones yet to do...

There are heaps of projects on the go, I guess tomorrow will have to be a binding day!
3 of my Sew It's Finished BOMs on the design wall - they will become a lap quilt for DMiL when we visit them next June; my Patchwork Club Challenge piece for the January exhibition needs the binding finished and the antennae stitched on; and the strips are for the binding of There's a Square in There! Still lonely is my chainlink fence, I might have to look up the deadline for that challenge.

Off the designwall are my D4P and Firework as well as several cushion covers; DH bought some fluffy fabric in addition to the ones I have started earlier in the year, I desperately need more inners to fill all these (I might give some away, soon there's more cushions than space on the floor which is where they always end when the kids come into the lounge!). However, after Wendy from Sew It's Finished appealed to us all, I completed another UFO in November:
This was my failed attempt at a Storm at Sea pattern in fire colours. At the Auckland Festival of Quilts I had an offer from a Wellington quilt shop to put me a kit set together, but I am not quite sure yet. However, I'm pleased I got this one out of the drawer. Not sure yet what if anything I'll do for December...